It is the first great war of a heart and a nation.

In the age of industrious war, young Andrew Boyd must choose between altering the fate of a nation and succumbing to the rapture of his heart. After years of poverty, Andy comes to work for the influential Stone family; its children henceforth defining his life. Headstrong William Stone quickly becomes an ally, while his sister, Cherish, torments Andy’s emotions. Though her feelings are distinct, they are obscured by the pretenses of society.  Passing through their teenage years together, the young couple’s conflicts amplify until eventually boiling over into The Great War.

Like war, love caters to those who are willing to sacrifice everything.  The story unfolds as Andy looks back upon the course of life, even as he nears the end of his. 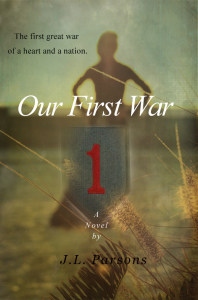 My childhood breath Cherish Stone
…And the loyalty of friends.

Deployed near the river at Bois de Bourgogne, France, they were to serve as the left flank of the main assault. As point, Andy chose his path carefully. His eyes locked forward, even as his mind lapsed back. All was unnaturally still. Their silhouettes were but ghosts in the aberrant autumn fog. Each man was able to see only the next in line; beyond that, nothing more than vague images of shambled ruins.
It made Will ever more vigilant. It was too quiet. For miles there wasn’t a sound other than their movements through the mist. The men focused on every tree as if it were an enemy, every ditch as if it were a parapet. Even the river seemed reserved.
After an hour, they broke from the shifting trees. A field of mossy mire passed beneath their feet. Tracks and shrapnel began to emerge from the fleeting fog. There were whispers in the air. Andy’s heartbeat echoed as he raised a hand. In an instant the mist was gone; as far as the eye could see, loomed the front line.
Abruptly, artillery soared overhead decimating the forest edge. Soldiers were stung on the wire as they ran forward. Fire opened from snipers and German machine guns in the hedgerow. The trench beyond the wire came alive with an enemy infantry. And then without warning, came their greatest moment.

From the bellows of fire drew a radiant glow; and with a breath, it took life. Ever enduring and beautiful, … turning in time to take form. It was unique. Irreplaceable.
“Andrew…Are you all right boy?” A soot-covered man shook the boy’s shoulders.
The boy stood still, amidst a pile of broken glass, staring off beyond the bellows. His dingy blonde hair sweat soaked to his cheek. It’s the exact spot he had worked for the last 14 months of his twelve-year life. What modest natural light did enter the factory flickered upon the infinite particles that littered the floor about him.
“I’m sorry Emmet. The bottle was hotter than I expected.”
It could be worse, he thought. He could be cold, instead of unbearably warm. It could be his first day instead of his last.
Small droplets of blood fell from his hand, spattering across his worn brown boots. In turning his hands over, several shards of glass became visible. He was the blower’s assistant. Such things were inevitable. Glancing quickly about, he went to work attempting to remove a few of them. Then just as sudden, he pulled some tattered cloth from his pocket and gently wrapped his hands.
Mr. Dillon, the foreman, could be seen rounding the furnaces. That same callous look was upon his face. Andy straightened as if to muster his courage in anticipation of the lecture.
“Not to worry, my lad.” Emmet began untying his leather apron. “It’s not anyone’s fault ‘cept that there man’s. The bastards got all you youngins working too long, mostly for his own pocket. Now you just start cleaning it up, and I’ll be handling the miser.” And with that, he turned to confront Dillon.
“Did that boy drop another bottle? That would be two in as many days,” spouted Dillon with dislike in his eyes. It was obvious to everyone that his contempt was more over Andrew’s leaving than a broken bottle. He had little regard for the desires of others.
“Oh; no sir! ‘Twas the smoke. It swelled onto my eyes as I was handing it to the boy. He was attemptin’ to catch it.” Asserted the old Irishman.
Pausing for a moment, Dillon glared at them both. “Well, you’ll be staying until you replace it,” he directed toward Emmet. “And as for yourself,” now scrutinizing Andy sweeping the floor, “I think it would be best if you’d be getting off now. Your mother is waiting out front and I’ve already given her your pay, so don’t be expecting anything.”
Agreeably they both nodded. Yet Dillon continued to warily stare at them, until another ruckus finally drew his attention. Sharply he walked off through the factory. So intent on watching everyone, he occasionally bumped a table and faltered. An isolated chuckle would be heard from somewhere. Other than that, there was only the hiss of blowers.
Andy felt the broom being pulled from his hand, and a firm pat upon his back. “See the world for me laddy?” a splintered smile grew on Emmet’s face.
In vain he attempted to say something, but Andy’s thoughts were once again distance, as was apparent to the old Irishman. He quickly embraced the sullied leather apron and the man within it.
“Now off you go, …go on.” And with that, the boy turned and scurried from the hazy hall. His mind was full of wonder. Barely was he conscious of leaving the factory, or passing his waiting mother, or even climbing into the seat of the Packard Touring. Both his heart and mind were racing.
The trip was a good distance from their home in Ohio. Farther then he’d ever traveled before. But it was time to move on. He could see the hopeful expression upon his mother’s face as they rode. This would be the seventh move in five years. He had long ago adjusted to life of scarcity. It was now just his mother and him on an endless hunt for anything. His father’s abandonment and his mother’s lack of skills had left them nothing. There were only momentary rests in places of little comfort. It’s the only life he really knew. But it taught him many things; like that the wind narrowed his eyes. Andy was eager as his mind wandered with wonder.
It was uncertain why an aunt he had never met had arranged for his mother to work as a servant for a prosperous family. With the beginning of a new century, many were favoring factory work. Electric mechanisms were being created to perform menial tasks. Every day, inventions were created to change life. Yet, there were those that held to the partiality of having subsidiaries.
The land and people were changing. The markings of war were slowly fading away. Even the rural fields were showing signs of industrialization, as horses drew clanging machines about the countryside. Through rising cities they passed the lure of opportunity on every street. He would finally know such a place, with new things to see and do, near a vast ocean he couldn’t possibly imagine. And as his head slipped to his mother’s shoulder, he thought…tomorrow!